Trying to keep the momentum from posting my June/July 2015 reading.

Haruki Murakami’s first two novels, 2/3rds of a trilogy that English language readers have had only the final 1/3 available, are now published together: Hear the Wind Sing and Pinball, 1973 as Wind/Pinball.

Since the Rat trilogy ends with A Wild Sheep Chase, a reread is up after the above.

The controversy surrounding both publishing and then the content of Harper Lee’s Go Set a Watchman is in line after the Murakami-fest.

Because some of my favorite people have convinced me to share, I will try to post periodically what I’m reading so here is what is on my computer screen and in my hands as my reading life for June/July 2015.

On February 1, 1960, four students from North Carolina A. & T., a black college in Greensboro, entered the local Woolworth’s department store. After making a few purchases, they sat down at the lunch counter, an area reserved for whites. Told that they could not be served, they remained in their seats until the store closed. More than any other event, the Greensboro sit-in launched the 1960s, a decade of political activism and students were on the cutting edge of social change. In 1960, the writer James Baldwin visited Tallahassee, Florida. to report on student activism there. Baldwin ruminated on the underlying causes of black protests and marveled at the militancy and idealism of the younger generation. To Baldwin, the movement challenged all Americans to rethink whether “We really want to be free” and whether freedom applied to all Americans or only to part of the population.

This is a brilliant satire of testing and a powerful use of meta-fiction. 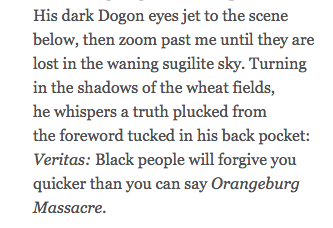 Powerful, disturbing, and important in the wake of the Charleston shooting at the AME church, this poem confronts and unmasks the racism under the label of “heritage” in South Carolina and the South in the person of Strom Thurmond.

The Crossing, publicized as the second installment of McCarthy’s Border Trilogy, is the initiation story of Billy Parham and his younger brother Boyd (who are 16 and 14 respectively when the novel opens). The novel, set just before and during World War II, is structured around three round-trip crossings that Billy makes from New Mexico into Mexico. Each trip tests Billy as he must try to salvage something once he fails in his original goal. On both his first and last quest he is reduced (or perhaps exalted) to some symbolic futile gesture in his attempt, against all obstacles, to maintain his integrity and to be true to his moral obligations. This novel explores such issues as guilt, the acquisition of wisdom, heroism, and the crucial importance of stories.

The landscape of the Marvel Universe is changing, and it’s time to choose: Whose side are you on? A conflict has been brewing from more than a year, threatening to pit friend against friend, brother against brother — and all it will take is a single misstep to cost thousands their lives and ignite the fuse! As the war claims its first victims, no one is safe as teams, friendships and families begin to fall apart. The crossover that rewrites the rules, Civil War stars Spider-Man, the New Avengers, the Fantastic Four, the X-Men and the entirety of the Marvel pantheon!