Throughout the 1980s and 1990s, I taught high school English in the public high school I had attended. The town and schools were the sort of traditional Southern environments that probably would seem to be caricature or even satire to someone not from the mid- to late twentieth century South.

I had been a very successful student at the school, graduating eighth in my class, but except for a few wonderful and life-changing teachers, I had found school to be mostly something to endure, especially high school as I became more and more recalcitrant.

When I began teaching there, several administrators and many teachers remained from my time as a student; while the traditional norms of the town and school endured—the greatest sources of my discomfort, having realized I was almost entirely unlike what was considered normal—I discovered as a teacher that I simply could not comply with the authoritarian disciplinary codes of the school. 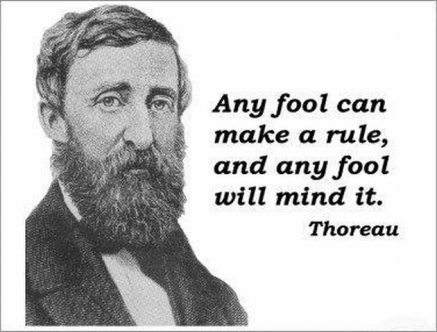 We used a demerit system, and eventually adopted both in-school suspension and an after-school homework detention. Many of the demerit guidelines were automatic penalties—for chewing gum or eating in class, being late, and any restroom visit during class time.

Teachers monitored their doorways and the halls during class changes, and were themselves monitored by administrators for compliance with these rules.

Over nearly two decades, then, these authoritarian (and ridiculous in my view) policies were the source of my constantly being reprimanded for not enforcing the rules. Late students entered my class, usually without disturbance, and took their seats; students also with almost no disruption ate occasionally in class (although one group of students began to organize bringing snacks for their groups and had something nearly akin to a picnic many days during writing workshop).

But the most egregious flaunting of the rules in my classes was my approach to students going to the restroom.

In a school where the principal had his own private restroom in his office, going to the restroom was a manufactured and persistent source of anxiety for students (and even teachers who had very little personal time during the day).

Thus, I never turned students in, but I also created a process in which I had permanent passes on my desk that students simply took before excusing themselves to the restroom—all of which occurred without them having to ask, resembling what some of us may associate with simply leaving class while in college.

Early in my career, part of this commitment to the dignity of my students was grounded in the very real and very publicly difficult process adolescent women face during their periods. No one, I decided, should ever have to fret over going to the restroom, regardless of the need, but my female students were among the ones most appreciative of being able to attend to their needs without question or public announcements.

In fact, my female students began keeping a supply of tampons in my desk; there were times students I had never taught would swing by my room and simply ask to have access to my desk.

This is what I am most proud of about my 18 years teaching high school: I was not perfect, and I certainly can confess to many mistakes, but on balance, students recognized that my room was mostly theirs and it also was mostly a safe haven for their ideas, their words, their genuine selves, and their human dignity.

I must add here that what I am most ashamed of during those years are the times I failed that commitment. I believe I can name all of them, all of the students involved, and I deeply regret my failures.

This came rushing back to me as I have been reading reactions to the “no excuses” unmasking of Noble Network of Charter Schools—the most disturbing example being:

One described an issue raised by others at some Noble campuses, regarding girls not having time to use the bathroom when they get their menstrual periods.

“We have (bathroom) escorts, and they rarely come so we end up walking out (of class) and that gets us in trouble,” she texted. “But who wants to walk around knowing there’s blood on them? It can still stain the seats. They just need to be more understanding.”

At certain campuses, teachers said administrators offer an accommodation: They allow girls to tie a Noble sweater around their waist, to hide the blood stains. The administrator then sends an email to staff announcing the name of the girl who has permission to wear her sweater tied around her waist, so that she doesn’t receive demerits for violating dress code.

Maybe because of my own discomfort as a student, maybe because my years teaching high school confirmed for me that the human dignity of students trumps everything else—everything else—I have been an early and persistent critic of “no excuses” ideologies, prominent in the charter school movement and championed by KIPP.

Because I have been a critic, I have been publicly attacked and falsely demonized in print by “no excuses” advocates and apologists who steadfastly deny the exact problems exposed in the coverage of Noble Network of Charter Schools.

Now, there may seem to be little to compare except for the poverty between student populations in my hometown, mostly white working-class and poor, and the majority-minority students served by “no excuses” charter schools. But I think we should all consider how authoritarian discipline (“no excuses,” zero tolerance, resource officers, metal detectors, suspension/expulsion) are disproportionately implemented with black, brown, and poor students.

Affluent and mostly white students at elite private schools are exempt from being subjected to “no excuses” ideologies for a reason.

One of my favorite words has always been “draconian” because it fits into that small camp of words that sound like their meaning (“awkward” is among the greatest of these because what is more awkward to English speakers than “wkw”).

Draconian schooling, like draconian parenting, are among the most vile behaviors by adults. Authoritarian adults are petty humans, and their lust for power over those already weaker than them is a reflection on their own pettiness, their own insecurities.

Noble Network of Charter Schools are not outliers; they are a harbinger of everything that is wrong with the charter school movement as well as our failure to create schools—public, charter, or private—that at their core protect the human dignity of all students.

Noble Network of Charter Schools is a real-life allegory confirming a central theme found in Margaret Atwood’s The Handmaid’s Tale, which warns through Offred how authoritarian practices create violent fantasies and behaviors; as one Noble teacher explains: “‘One student says it best,“When you treat us like animals, what do you think we are gonna act like?”’”

There is nothing noble about “no excuses” for our children and teens when the adults behind those practices are themselves above the moral and ethical standards they claim to be demanding of students.

One thought on “Draconian: of, relating to, or characteristic of Draco or the severe code of laws held to have been framed by him”