Season 2 of Mindhunter focuses on the Atlanta child murders; in one scene investigators interrogate a local KKK member.

As a lifelong white Southern male, I found the characterization of that man—what many would call a Georgia cracker—to be unsettling. He is arrogant, self-assured, and able, as he declares, to wrangle his way out of any trouble.

What is off, I think, is that in real life this type of poor Southern white man is an odd but distinct combination of embarrassed arrogance. They are stubbornly self-assured—and completely un-self-aware. But they are also painfully laconic, and if you look carefully, they often become flushed, the blood rising in their necks and faces as they swell with both anger and embarrassment.

In the audio of the wiretap that leads to this KKK member being interrogated, there are hints that Mindhunter is softening the characterizations (that dialogue, and the verb usage, is far too formal) so the scene that bothers me seems to be a reasonable cinematic decision—although it fits into a current narrative about white men now who seem to be afraid of losing status that they never deserved in the first place.

Within a couple days of watching that scene, I happened to finally view Burning, a celebrated Korean film based on Haruki Murakami’s “Barn Burning,” which is the Japanese author’s take on William Faulkner’s story of the same name. 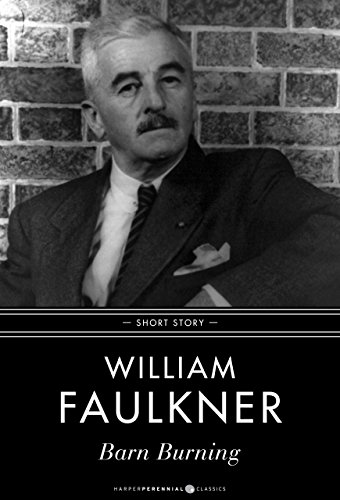 After seeing the film, I decided to re-read both Faulkner’s and Murakami’s stories.

My experiences with Faulkner began flatly in high school, “The Bear,” and then more seriously in a Southern literature course where I found myself deeply embarrassed and suddenly aware of how much I did not know as a junior English education major. Immediately after I graduated college at the end of the first semester of my fifth year, I set out to read everything by Faulkner as I spent several month substitute teaching and doing a long-term sub—all while applying for what I hoped would be my first teaching job that coming fall.

Faulkner then provided for me, still deeply uncritical, an influential combination of modernism filtered through a deeply familiar Southern voice; there was much there that was technically and verbally dazzling (or so it seemed to me as a twenty-something want-to-be writer and teacher).

In 2019 Trumplandia, however, as I rapidly approach 60, I found a much different Faulkner in my re-reading of “Barn Burning”—one now informed by, for example, James Baldwin’s confrontation of Faulkner and the uncomfortable reality that even my well-educated friends now lament that times are really hard for white men in this #MeToo era.

If you are not from the South and you want to understand my opening concerns about the absence of the embarrassed arrogance in the KKK member being interrogated, or if you can’t quite grasp yet who Trump voters are, I suggest you wade into Faulkner’s “Barn Burning” to witness Abner Snopes. A few pages in, readers have the central character of Snopes detailed:

There was something about his wolf-like independence and even courage when the advantage was at least neutral which impressed strangers, as if they got from his latent ravening ferocity not so much a sense of dependability as a feeling that his ferocious conviction in the rightness of his own actions would be of advantage to all whose interest lay with his.

And later in the story, once the family has been once again relocated because of the father’s serial criminality, Abner Snopes chastises is young son Sarty (the eyes of the story) for nearly betraying his father in court:

You will witness Snopes go before the Justice of the Peace twice, quite guilty both time and quite determined that he should not be punished because his actions, to him, are entirely justified—both the burning of a barn and tracking horse manure across the rug when he arrives at Major de Spain’s farm. Snopes is all rugged individual (“wolf-like independence”) and white nationalism/tribalism (“‘your own blood'”) bundled into Southern embarrassed arrogance.

Few things anger many poor white males in the South more than questioning or challenging their honor code, a code wrapped in white nationalism; Snopes rations out his justice and expects everyone else to step aside, recognize its authority.

Re-reading the story also revealed to me how Faulkner incorporates a distinct element of materialism to the theme of individual versus communal justice. Snopes destroys the property of those wealthier than him to assert his dominance in the same way Snopes uses racial slurs about and at black characters in the story.

Snopes is just as domineering with his family, the women and children subject to his verbal and physical wrath, his expected but unpredictable lashing out. Snopes desperately clings to the mythical fiefdom he has manufactured thoughtlessly in his mind.

Faulkner’s story ends with the boy’s sense of “‘truth, justice'” finally coming to a deadly climax with his father’s barn burning, but even as the boy feels compelled to betray his father, his blood, Sarty cannot rise above the engrained but distorted myth of his father:

Father. My father, he thought. “He was brave!” he cried suddenly, aloud but not loud, no more than a whisper: “He was! He was in the war! He was in Colonel Sartoris’ cav’ry!” not knowing that his father had gone to that war a private in the fine old European sense, wearing no uniform, admitting authority of and giving fidelity to no man or army or flag, going to war as Malbrouck himself did: for booty—it meant nothing and less than nothing to him if it were enemy booty or his own.

As Faulkner is apt to do often, the story reveals itself as one of the self-defeating South, where pride in tradition fails any reasonable effort to ground that pride in an ethical unpacking of the past.

Today the laconic embarrassed arrogance has shifted to rants on social media defending the Confederate Flag and arguing that the South fought the Civil War for state’s rights or wildly claiming many blacks fought in Confederate uniforms in that sacred war.

Especially in 2019, both Murakami’s story and the film adaptation help put Faulkner’s story and today’s angry white men in a sharp relief.

Murakami tends to traffic in disassociated men, what can be misinterpreted as sympathetic narratives about the male condition. His “Barn Burning” is steeped in the naive narrator (the film directly mentions The Great Gatsby, but those familiar with Murakami’s work can feel a sort of Nick narrator in this story, fascinated with the mysterious and wealthy boyfriend who appears with the younger woman at the center of the story).

Barn burning is the surprising confession by that mysterious new boyfriend, who decides to confide in the narrator and give the story both an air of mystery and a much more ambiguous (although still detached) moral center than Faulkner’s stark display of Southern honor:

“I’m not judging anything. They’re waiting to be burned. I’m simply obliging. You get it? I’m just taking on what’s there. Just like the rain….Well, all right, does this make me immoral? In my own way, I’d like to believe I’ve got my own morals. And that’s an extremely important force in human existence. A person can’t exist without morals.”

This self-identified barn burner, then, is a more expressive Abner Snopes, and Murakami’s version is far more ambiguous about the barn burnings and how the reader is supposed to judge, or not, the three main characters—the married narrator, the twenty-year-old woman involved with both men (and who falls asleep easily), and the new boyfriend who flatly states he burns barns.

Another twist added by Murakami is when the narrator confronts the barn burner about not being able to find the most recently burned barn: “‘All I can say is, you must have missed it. Does happen you know. Things so close up, they don’t even register.'”

A brief exchange but, I think, a valuable commentary on anyone’s lack of self-awareness—the inability see the things so close up but that still drive who we are, what we do, and how we navigate the world as if our morals are the right ones.

Murakami leaves the reader with more unanswered, however, capturing some of the indirect and ambiguous also lingering at the end of Faulkner’s story.

[Spoiler alert for the film Burning.]

And this brings me to the film adaptation that moves beyond Faulkner’s modernist and Murakami’s post-modernist tendencies.

In the film, the barn burning mystery (transposed to burning greenhouses) becomes a frame for the new boyfriend being a serial murderer and the central character being pushed himself into asserting violently his own moral code.

The movie adaptation steers the viewer into a psychological mystery. As we watch along with the central character, Lee Jong-su, a disturbing picture develop. Ben declares to his new girlfriend, after Shin Hae-mi has disappeared, that burning greenhouses is merely a metaphor (that the viewers and Jong-su recognize as a metaphor for his being a serial murderer of young women).

To work through Faulkner to Murakami to Burning is more than a journey through literary/film theory and genre/medium. This an exercise is coming to recognize the very real and violent consequences of the anger that rises in men of a certain type (maybe, as the film suggests, all men) who cling to their individualistic moral codes to the exclusion of everyone else.

These are not just the men of a short story or movie; these are the agents of mass shootings and the daily terrors of domestic violence and sexual aggression and assault.

As a white man from the South, I struggle with the sharp awareness that the tension in Sarty between some larger communal ethics and the myth of this father remains a reality for young men in 2019. I also fear that the new narrative that the world is becoming too hard for men is very fertile ground for the sort of unbridled arrogance and violence that pervades the U.S.

Faulkner’s story ends in allusion. The barn burning blazes behind Sarty, who understands what the gun fire he hears confirms. Yet, he walks away, and “[h]e did not look back.”

If Faulkner is being hopeful here, I cannot muster that same optimism today.