She is five or six years old, my daughter, sitting in the backseat and requesting “Dog in the Sink” from the R.E.M. mix-tape I made her. 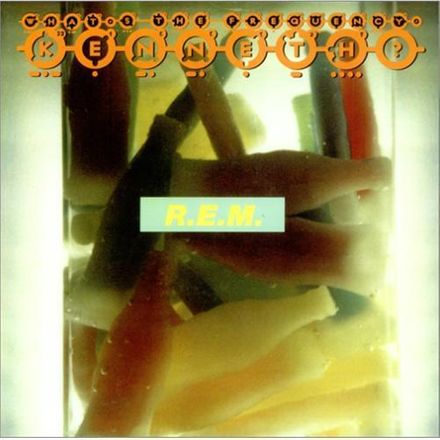 Typically, my daughter would ask me to play songs, often R.E.M. since that is what I was listening to almost all the time, and to sing along while she watched me singing in the rearview mirror. Once she had the lyrics, she would tell me to stop, and she would then sing.

By the time she was 10 or so, she could sing all of “Its the End of the World as We Know It (And  feel Fine)”—much to the amazement of family and friends.

R.E.M. is re-releasing Monster, a 25th anniversary edition, so “Kenneth” has been on a loop in my head for several days.

As she grew up, of course, she understood more and more of the lyrics, including the profanity. I never shielded her from the music I listened to so our adventure with music morphed a bit from those mostly innocent early days.

Another album just passing its 23rd anniversary is CAKE’s Fashion Nugget. My daughter was fascinated by “Nugget” as an early teen; it is profane and in your face.

When she would climb into the car with some of her soccer teammates, as we drove to lunch between matches, she would ask me to play “that song,” and I would survey the friends—”Your parents are ok with this?”—and we’d listen to “Nugget,” her face beaming.

I have several of these song moments permanently imprinted in my memory—my daughter singing “O, my, my, O, tell yea” unaware of “hell” as an option while singing along to Tom Petty, for example.

But as “Kenneth” has been on a permanent loop in my mind, I have realized that I struggle to recreate in those memories my daughter sitting in the back seat. I have this vague awareness of that, but I often lose her face and child self behind the more immediate image of my granddaughter, who I see often and spend a good deal of time interacting with in her carseat.

I have lost forever a world of mixtapes and spending every waking moment in the service of a child.

“Kenneth” on a loop in my mind makes me very happy and deeply sad all at once.

I also will never again have a new R.E.M. album. I have, in fact, just redecorated my office, replacing some of the R.E.M. posters with The National—a band I found through R.E.M.

I have always been haunted by Emily in Our Town, after her death realizing that we can’t and don’t look at anything hard enough in the moment.

“The world is too much with us,” Wordsworth warns; we are too busy living to really appreciate the moment.

My daughter used to come down stairs and repeatedly run and jump on me on the couch. She was rambunctious and laughing. But I was too often easily exhausted by that.

It deserved more. It deserved the same care and attention as those times we spent in the car, me playing songs she requested and her eventually telling me to stop singing so she could.

I was too easily distracted in my 30s and 40s: “Getting and spending, we lay waste our powers”; squandering, I would add.

I am better now in some ways. I will sit on the floor with my grandchildren, even when it is exhausting and even when I know it will last only a moment before they are off to something else.

I have sat hours quite still with each of those grandchildren in my lap, sleeping or watching TV or their iPad. I used to joke I was my granddaughter’s recliner.

It is a pose I am happy to hold—now.

It is a bit overwhelming to realize I have lost those images of my daughter as a child, her voice even, and her mannerisms and personality. All of that morphing into my granddaughter.

When I confuse the names of my daughter and granddaughter it may be the most honest moments of my life. They have piled up inside me in a way that I cannot untangle, a way that I would never want to untangle because I would be afraid of completely unraveling it all. Losing again what I have lost already.

“Papa, look!” my granddaughter demands as I am driving; I struggle to make her happy, but I have to explain I can’t turn around while driving.

I try to use the rearview mirror, but my granddaughter will have none of that. She wants my full attention, not some indirect reflection.

The rearview mirror was enough for my daughter.

It’s a shame mirrors reflect only the moment. It’s a shame we often don’t enjoy those moments.