My experience with Yoko Ogawa’s The Memory Police was filled with moments of disorientation that matched at a much smaller level the events of the novel, set on an unnamed island where the inhabitants suffer through a series of disappearances under the surveillance of the Memory Police.

First, I was drawn to the stunning cover and a description promising a stark work of science fiction. 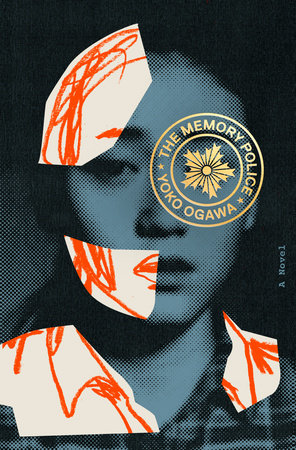 Since I received a hardback copy and the inside flap claims the novel is a “stunning new work,” I began reading the work as exactly that—a newly published novel by a young writer.

Yet, as I read, the genre wasn’t so neatly clearcut, and I soon learned the novel is from 1994, the English translation being new, but Ogawa, now in her late 50s, has a celebrated career in Japan.

“I sometimes wonder,” the narrator begins, “what was disappeared first—among all the things that have vanished from the island” (p. 3). And from there, the novel proceeds ominously but softly, or subtly, in a voice and a story that do prove to be stark but defy a simple label of science fiction; at turns it reads as fantasy, and then as fable or allegory.

For a book centered on the provocative act of disappearing, I was drawn as well to how much is not there to begin with. Character names and place names are missing or sparse. But I also felt off balance, disoriented, by the mismatch between the patient and soft narration against the foreboding doom of the disappearances, some of which seem minor although the loss and the ever-present threat of the Memory Police render all of the disappearances life-altering.

Reading Ogawa for the first time reminded me of Haruki Murakami, Albert Camus’s The Stranger, and Philip K. Dick—although I quickly warmed to seeing the novel as purely a work by Ogawa. In some ways there is a sense of detachment and very slow development I find often Murakami, and may be shared qualities of Japanese narrative.

Broadly, Ogawa’s fable is a powerful reflection of Camus’s existential message from The Stranger: “after a while you could get used to anything” (p. 77). However, in Ogawa’s allegorical nightmare, that concept is both proven and stretched almost beyond comprehension by the end of the novel.

It is the similarity with Philip K. Dick that sits strongest with me, though. Like Dick, Ogawa creates a pervasive sense of foreboding and fatalism in the lives of the characters. The totalitarian reality of The Memory Police is similar to many of Dick’s works as well as Margaret Atwood’s The Handmaid’s Tale and The Testaments, but Ogawa keeps the reader detached from and uninformed about the facts of that oppressive society.

Also similar to Dick, Ogawa investigates human nature, including what makes anyone human—or in this case, what can a human lose and still remain human (similar to a motif in Kazuo Ishiguro’s Never Let Me Go).

Another sparse aspect of the novel is plot, but as a reader, I was fully engaged with the characters; Ogawa’s careful and delicate portrayal of friendship and intimacy suggests that at least one key component of being fully human is our community with others.

The Memory Police begins calmly and persistently, but it never really reaches a boil or fever pitch, ultimately fading to the end more so than disappearing suddenly as is the case within the narrative. The novel, in fact. ends with the word “disappear,” and I was left filled and emptied simultaneously.

While reading this novel, I ordered four more of Ogawa’s works, and immediately began The Housekeeper and the Professor, where I found a rhythm that feels distinctly Ogawa’s. While this slim novel reads as literacy fiction with a touch of allegory, absent many of the conventions of genre fiction, Ogawa once again deals with memory. In The Memory Police, characters not only have material disappearances, but over time, most of the characters no longer remember what has been lost—except for the rare few who become targets of the Memory Police.

Recall becomes dangerous, and suggests those with their memories intact have power that the omnipresent Memory Police are charged with erasing.

The premise of The Housekeeper and the Professor is not fantastical, but it is exceptional; the Professor of the title is an aging mathematical genius who, after an accident, has only 80 minutes at a time of memory along with his memory of his life prior to 1975.

Since his short-term memory constantly resets, his sister-in-law, alone as his caretaker, is challenged to keep a housekeeper employed to manage his life.

Ogawa builds on this unusual circumstance a really sweet and beautiful narrative about the housekeeper, her young son (dubbed Root by the Professor), and the Professor. The characters are often gentle and kind souls, often delicate, in spite of the odd nature of the Professor’s life and their tenuous relationships.

The story is often quirky, and Ogawa manages several moments of real tension on much smaller levels than in The Memory Police, but palpable tension none the less.

Although not essential knowledge for the reader, this novel’s use of mathematical principles is the motif that holds the story together, more weighty than the low profile of the plot and the slow development of the themes and characterizations. For the Professor and eventually the housekeeper and her son, math is beautiful and fascinating.

In Ogawa’s work, memory as that blends with all human relationships seems to be an essential element of being fully human, but in The Housekeeper and the Professor, readers also witness something about our basic humanity, for example in how the Professor interacts with and teaches Root:

Among the many things that made the Professor an excellent teachers was the fact that he wasn’t afraid to say “we don’t know.” For the Professor, there was no shame in admitting you didn’t have the answer, it was a necessary step toward the truth. It was as important to teach us about the unknown or the unknowable as it was to teach us what had already been safely proven. (p. 63)

That last sentence, I think, is a wonderful description of my experience reading Ogawa, which now continues with her collected three novellas, The Diving Pool.

After the Winter, Guadalupe Nettel

The Transmigration of Bodies, Yuri Herrera

Signs Preceding the End of the World, Yuri Herrera