While I was teaching high school English in rural South Carolina, I became close friends with a colleague; I was English Department chair and also taught Advanced Placement, and he was the chair of history and also taught A.P.

But the strongest bond we shared was our similar life experiences of having been born, raised, and educated in the Deep South. We came to be ideologically quite different (radical, progressive) than how we were raised (traditional, conservative) in redneck and racist homes. And we both quickly attributed this transformation to our educations, although in slightly different ways.

My colleague often noted that when he and his father fought as they grew older and farther apart intellectually (as I did with my father), his father would often end those fights by declaring that the biggest mistake he ever made was sending my colleague to college.

While I did in fact attribute my liberation from all sorts of negative -isms to wonderful and thoughtful professors and classes in my undergraduate education, my colleague actually graduated college mostly unfulfilled, but motivated to self-educate by reading widely and deeply. Yes, college helped his transition, but he did a great deal of his own intellectual soul-searching after he graduated.

Both of us also eventually sought doctoral degrees later in life and then moved on to higher education. As a result of our backgrounds and experiences in K-12 and higher education, I think, I have noticed two important conversations on social media that at first may not to seem related, but they highlight how often the media and the public misread higher education and the larger question of why we have formal education.

One debate is about political alliances in higher education:

Is there any evidence that faculty support Warren and grad students support Sanders? Or is this one of those things where people glom onto an impression of a type and reconstitute it as truth?

Embedded in this question (an interesting and valid one in many ways) is a couple assumption: (1) the monolithic progressive (liberal) professorate, and (2) a hidden class division within academia that avoids the institutional hierarchy of academia (tenure and promotion structures).

Here is an often ignored fun fact about higher education: Professors and contingent faculty are not monolithically progressive, liberal, and/or leftists.

In fact, some disciplines highly influential beyond the academy are the most moderate and conservative—economics, psychology, political science.

But professors are disproportionately among a privileged class due to their academic status in the academy (although how we arrived here does create some tensions, speaking as a working-class academic). That intellectual privilege skews academia toward a very moderate progressive-leaning middle.

Those of us who embrace and practice a genuine leftist or radical approach to academics and life are outliers, often marginalized in ways that publicly marginalized groups are not overtly treated in academia. For example, higher education is quick to give lip service to inclusion for LGBTQ+ individuals and communities but not to openly Marxist professors (and for the record, stating inclusion doesn’t magically create inclusion even in higher education).

The key distinction between academia and the so-called real world, then, is about the norms of discourse in each setting. Yes, higher education is more aggressively complex and progressive in how many topics are discussed and examined. To people outside academia, this discourse norm seems left of mainstream society (I imagine that is a fair assessment) and likely seems more permissive and less traditional.

It is at this tension where misreading academia can be more directly examined. That tension is captured well in this exchange on social media:

College is also a place where you can learn about things that your parents and school boards and state curriculum designers are uncomfortable with. https://t.co/5EwLdHXsHl

Jason Myers is making a case for a utilitarian, or essentially conservative, view of formal education—to prepare anyone for the world as it exists (in the U.S., that is to create workers). Erin Bartram, however, is speaking for a much broader purpose of education, essentially progressive, one that contributed heavily to my colleague’s and my transformation—to foster critical consciousness and autonomous citizens.

The tension in these Tweets is reflected in the difference between Democrats and Republicans on college: 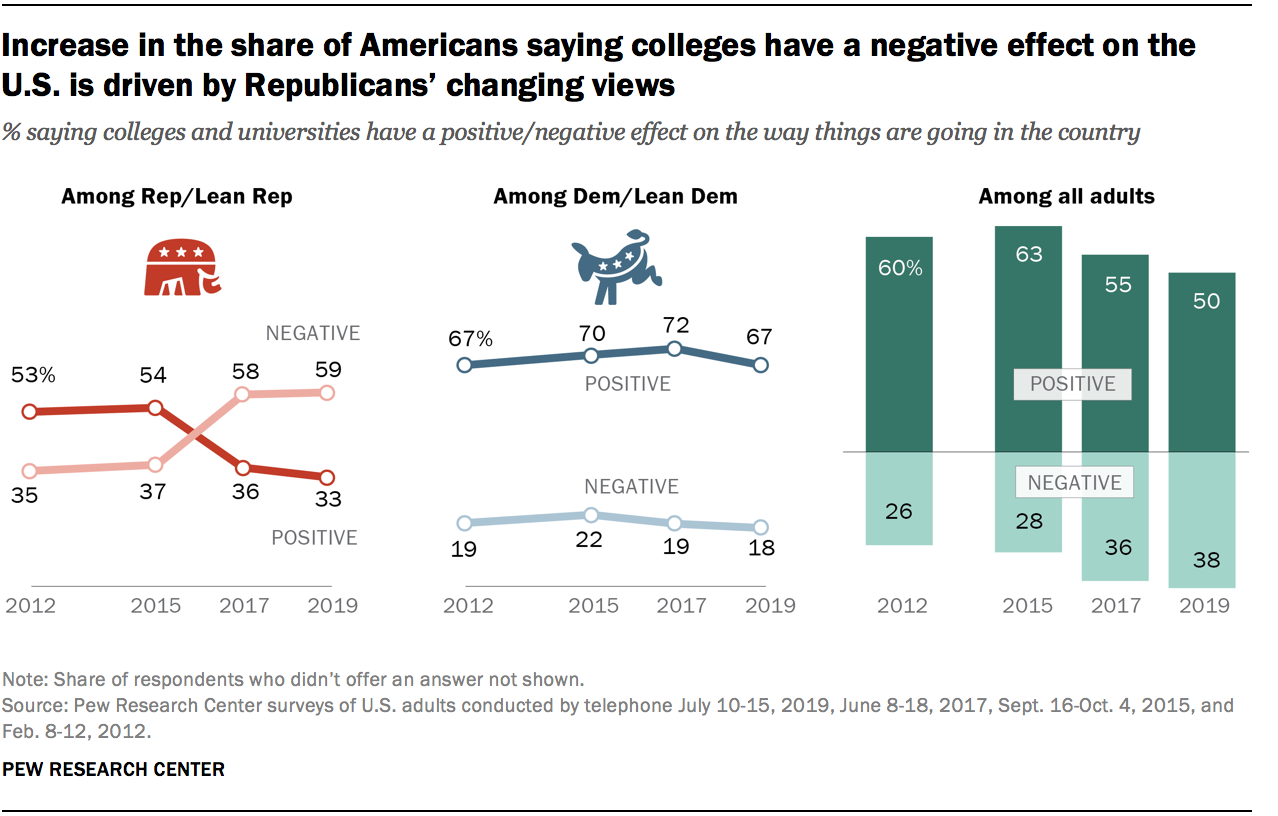 There is a similar partisan contrast in terms of perceptions about professors as well: 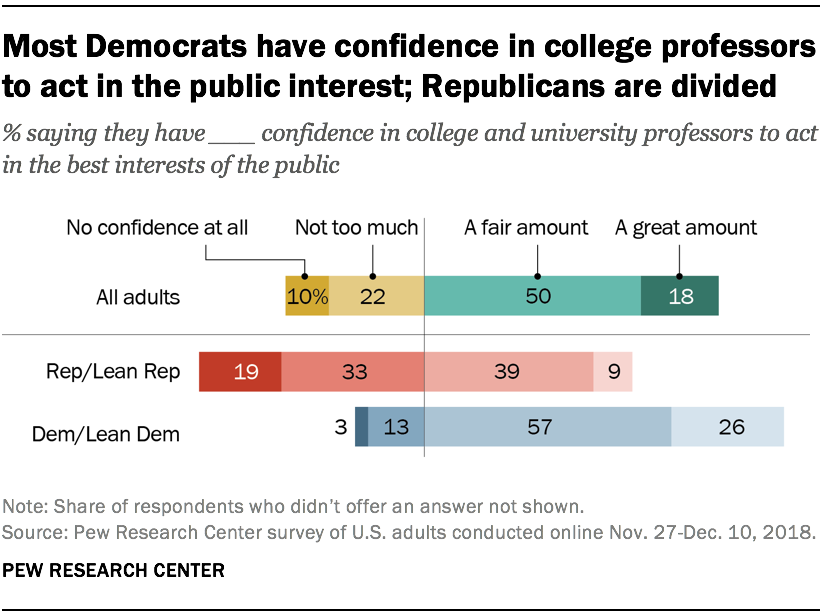 Misreading academia as uniformly progressive or leftist is grounded in how anyone views the purpose of formal education. Many in the U.S. are ideologically conservative and traditional so anything that seems to challenge that tradition or call for change is viewed skeptically if not cynically.

The current fear-mongering around single-payer health care is an excellent example of how a relatively moderate idea (universal health care) is framed as radical or “socialism” by a conservative culture (media and the public see the status quo as predictable and safe; therefore, change is to be feared).

As a Southerner raised in a conservative home and community, I can attest that formal education has the potential to be transformative—it worked for me—but as someone who is a leftist, I can also attest to the fact that academia is no progressive playground of fair-minded and ideological leftists.

Structures of higher education and the disciplines are too often inequitable and conservative, protective of the status quo even when that reality reflects and perpetuates the worse aspects of society.

Is there more space for equity and inclusion, diversity of radical thought, in higher education? Yes, and when formal education is about interrogating the world, then we are experiencing a more progressive environment. But that is not the norm of higher education because all institutions are prone to self-preservation.

The possibility of education in the pursuit of interrogating the world will always feed the tension between formal education and the so-called real world, leading some to misread higher education for its outlier qualities.

But the greatest tension of all may be at the root of the skepticism among conservatives about higher education (and all formal schooling); education is a debate about who decides what knowledge matters.

For children and young adults, universal public education and public higher education may provide some of the few safe spaces for a young person to discover a rich knowledge base that allows them to rise above indoctrination, bigotry, and uninformed lives.

This is, I admit, as ideal I aspire to as a teacher/professor, something I work hard to nudge my school toward. And simply by hoping a formal education can be a doorway into the life any person wants and deserves, I am that liberal professor people who misread higher education warn you about.