While Trevor Lawrence—probably the highest profile white Division I college football player in 2020—has become the face for the #WeWantToPlay campaign calling for a start to college football amidst a pandemic, the Colorado State University football program has been forced to reckon with a racially toxic culture, implicating their former coach and current assistant coach at the University of South Carolina (Mike Bobo).

The #WeWantToPlay campaign appears to be garnering greater media and public coverage, but the CSU controversy should not be ignored, and should not be examined as a culture problem somehow centered only at CSU or in the individual coaches named in that coverage.

Charges by Black players at CSU are powerful and damning: 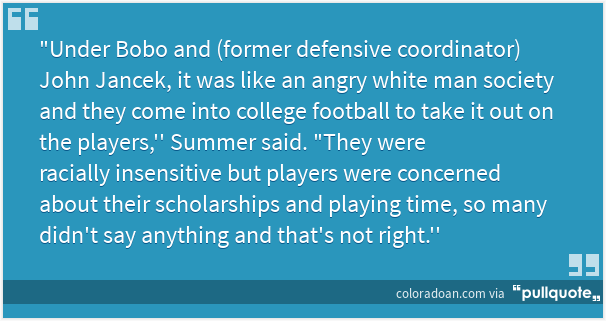 However, again, this is not about CSU solely or a few high-profile coaches; this is about “closed systems” and a normalized culture of abuse “hidden in plain sight”: 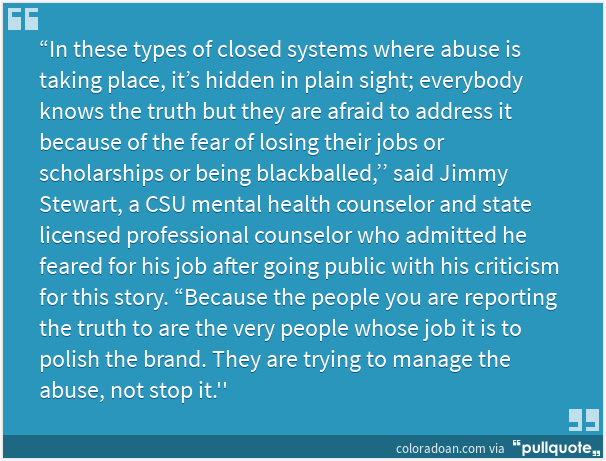 Black athletes describing the culture of their football program as “an angry white man society” can and should be amplified to describe the entire system of big time football in the U.S. Start by considering the numbers:

In mass media and popular culture, sport is often presented as a level playing field where the most skilled and committed athletes rise to the top. The racial composition of American football is often presented as evidence of the supposed meritocracy of sport. While 13.2 percent of the U.S. population is black, 47.1 percent of NCAA Division I football players and 68.7 percent of National Football League (NFL) players are black.

White Americans hold the vast majority of power and wealth in the U.S., skewed significantly toward white men. Yet, white Americans tend to struggle with concepts of systemic inequity (racism, sexism, etc.) that depend on understanding the invisibility of white privilege for white people and the key statistical concept exposed above, “disproportion.”

Even as the killing of George Floyd by a police officer has reignited awareness and public protests about police violence being racist, this movement has not silenced or erased the “but police shoot and kill more white people” response, echoed by the current white nationalist POTUS.

For people with power, then, grasping data about disproportion is often a paradoxical experience (Simpson’s Paradox) because of white denial and white fragility:

The people making this argument don’t dispute the fact that police kill Black people at disproportionate rates. A Black person in America is roughly three times more likely than a white person to be killed by police. But according to this argument, the disparity is rooted in crime rates and more frequent encounters with police, not racism. In 2018, the rate of arrests for violent crime was 3.6 times higher for Black people than white people. So actually, the argument goes, Black people are underrepresented as victims of police killings, after controlling for the number of encounters.

Big time college football is both a reflection and perpetuation of the larger systemic inequities (such as racism and sexism) throughout the U.S.

But the current charges against coaches and the program (culture) at CSU are not merely a condemnation of CSU or the former and current head coaches. These charges are historical and current features of sports across the U.S., starting when athletes are children and running through the very small percentage who make sports their livelihoods.

The mythology that coaches (overwhelmingly white men) are building character in their athletes and are nearly universally “God-fearing, good family men” is one of the ugliest lies in American culture.

Sports in the U.S. is never about building character and certainly isn’t in the service of God (despite the veneer of Christianity that is layered onto every aspect of scholastic sports in the U.S.), but about winning and the wealth and aggrandizement of coaches and the institutions associated with those teams at the expense of the athletes (often disproportionately Black bodies):

“After watching George Floyd being humiliated before he died, it triggered in me the times I saw or heard about certain coaches humiliate student-athletes and the fact that not going public made me complicit and compromised my integrity,” said the 65-year-old Stewart, who is white. “I also became conscious that racism is about being a bully. In that encounter with the Black student-athlete, Coach Addazio had this attitude that he’s bigger and more powerful than the student-athlete. The student was enslaved.”

The day-to-day normalized behavior of coaches—yelling, berating, swearing, threatening—would be viewed as bullying and abuse in virtually all other situations where there is the sort of power, age, and racial imbalance as there exists in sports.

The abrupt and sustained pauses created by the Covid-19 pandemic have the potential for not only the needed reckonings echoing around many of the foundational aspects of American culture but also long-overdue revolutions in those institutions, including how we educate young people as well as how young people are invited into and coached through sports (since in the U.S. formal education and sports are nearly inextricably intertwined).

White men coaches are reinforced at every turn that they are “good men” despite their behaving as bullies, despite their racist and sexist ideologies mostly veiled or closeted behind the secrecy of male bonding and locker rooms:

A member of CSU’s football staff said Addazio has downplayed the COVID-19 health threat and Black Lives Matter movement, which have dominated public discussion in recent months, calling both a “distraction from football” to be managed.

“He’s smart enough not to come right out in public and say it, but he thinks BLM (Black Lives Matter) is a crock of s—, and that has come out in meetings,” said the football staff member who wished to remain anonymous. “When we had the incident with the player (a Black CSU football player was held at gunpoint by a white man while working in Loveland), the players wanted to march with shirts that had BLM on it, make posters and say chants. He told them if you are going to do that we aren’t marching.”

CSU and the University of South Carolina likely have some hard decisions to make, and probably are hoping to sweep all this under the rug while people struggle against the avalanches of crises surrounding them—from the Covid-19 pandemic to the rumbles of a 5.1 magnitude earthquake at the North Carolina/Virginia border.

I suspect these universities will issue a few more statements, probably conduct some investigations and also create reports months down the line; there may be some very mild consequences for the coaches named (but their already earned millions will not be touched, of course).

The white coaching shuffle, in which mediocre white men fail upward while stepping on those Black bodies for leverage, will continue, however.

Big time college football is an important subset of American culture, a point being fumbled by Lawrence calling for #WeWantToPlay.

The U.S does not need major college football to return to normal and resume as soon as possible in the coming weeks, the fall of 2020.

A full and complete unmasking of big time college football would be welcomed, and should precede any efforts to return to our contemporary and slightly sanitized gladiator event that was always about sacrificing some Other bodies.

The Christian Veneer: On Dabo Swinney and Donald Trump

College Athletes’ Academic Cheating a Harbinger of a Failed System

Coach K, Sports Fandom, and More on My Redneck Past

I Swear: On “Grit,” Adult Hypocrisy, and Privilege